So it’s not just me then – late payers ARE a problem. The AFR says so.

Posted by Sabrina | News | No Comments
I was talking to my accountant earlier this year when I did my tax return and we got onto the subject of late payers. I have two or three of them, some debts going back more than a year. He, having hundreds of clients, has considerably more. If I'm fuming about people not paying me for services and websites rendered (and I am!), and his anger is in direct ratio to mine, I'm surprised his brain hasn't exploded. It seems people are scared to take their money out of the bank to pay bills. Assuming they have any in there, that is, late payers hurting the cash-flow from smallest company to largest. My accountant told me of one of his clients (anonymously) who has plenty in the bank but won't pay their tax bill, preferring to leave the money earning pitiful interest, and taking a slug from the tax office of 12% interest on the balance owing. This same company owes my accountant thousands. Again they have the money in the bank but will they pay him? Will they hell! He's lucky to get $500 every couple of months from them. He and I it seems are not alone. There is an article in today's Australian Financial Review. Read this. 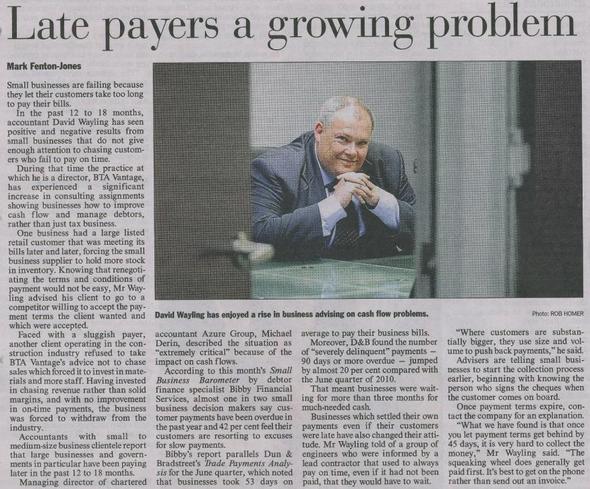 Note that large businesses and government agencies are paying slower. This has a direct impact on small to medium enterprises, and considering SMEs make up to 80% of registered Australian businesses, these are dire times for all of us who own a business. Late payments trickle down the line and have the potential to put us small guys out of business. Maybe I'm too nice. I pay my bills. On time. Including the tax man. Even if it leaves me with not much in the kitty until the next client comes along. It's the way I was brought up; the deeper into credit you get, the harder it is to get out. The GFC may be over but believe me, we are still feeling the impact and late payers are an obvious indication. How many of you out there with your own business are experiencing trouble with late payers? And what are you doing about it? Have you called in debt collectors or taken legal action to recover debts? Will your late payers agree to go onto a payment plan, paying you some each month, and stick to it? What's your next move? And when do you think the economy will start to recover? Answers on a postcard please (or just leave a comment).
0

Could the rail link finally become a reality?

Posted by Sabrina | News | No Comments
You can tell it's election time. The Federal government has announced the Epping-Parramatta Rail Link is back on the agenda with work to start next year. If all goes to plan it will be complete in 2017. Frankly, I'll believe it when I see it. I'd love to think it will actually happen. The State Government went ahead with the Epping-Chatswood part of the rail link and to date it's been reasonably under-utilised. A key factor in that is that is doesn't go all the way to Parramatta. You still end up with a rail bottleneck at Epping to get anywhere else. If you want to get to Parramatta from North Ryde by rail you change at Epping AND Strathfield, and hope the connections are favourable and the trains are running on time. It takes 48 minutes, apparently, for the journey.  Is it easier, and in fact faster, to take the car? In most cases, ie outside peak hour, it is. I've done it by rail and car outside peak hour and car wins hands down; in peak hour I'd prefer the train I think. Let the traffic be someone else's problem. Actually having a through service from Parramatta WILL get used, I believe. It's a truly viable alternative to sitting in peak hour traffic. The entire journey from Parramatta to Chatswood via the rail link will shave 25 minutes off the current journey via rail. Right now if you want a direct train that does the journey it takes almost an hour and goes through the Sydney CBD. I haven't seen the projected figures today on how long it will take to get from Parramatta to North Ryde, but it has to be a heck of an improvement on 48 minutes. If you had to drive down the M2 it could take you an hour if there are holdups. There are currently bus services from the Hills area that only take 30-40 minutes in peak time, but the buses are apparently packed like sardines. So when the rail link is in place it's probably worth making your way to Parramatta station and jumping on the train. This is something the rapidly growing Macquarie Park area desperately needs. Epping Road, Lane Cove Road and Victoria Road are daily bottlenecks. Employers are urging their staff to use public transport to get to and from work, but if the buses are stuck in traffic you may as well just drive. Having a rail link from the west, a lovely direct link, will make the area more attractive to prospective employees and corporations seeking a home. This area is one of the biggest business precincts in NSW and growing day by day. It's criminal that the State Government ditched the Epping-Chatswood part of the link in the first place. Now I love my car. I love having the freedom and convenience of my own personal transport, of not having to sit next to someone fat/smelly/noisy/talkative who is a complete stranger enroaching on my personal space. But if I have to go into the Sydney CBD, for example, I'll take the train 9 times out of 10 (unless it's nighttime). I can sit back with a book and an iPod and relax, strangers permitting. It's quicker, or just as quick, as driving. Usually if I'm in the North Ryde area I'm running errands from Hunters Hill and Henley through central Ryde and up to North Ryde, and using public transport isn't really an option as it would add literally hours to my journey. Either that or I'm carrying banners and bags and boxes; again not ideal on public transport. But for single meetings - using a fast rail link makes sense. Sprawling Sydney desperately needs improved public transport, particularly rail and light rail which is capable of mass transportation. Will the Government keep its promise if it's elected? We have to remember that the Epping-Parramatta Rail Link will run through Bennelong, which at the moment is a very marginal seat. The state Labor government has steadfastly cancelled or postponed rail plans for the Sydney Hills and northwest region as it's blue ribbon Liberal territory. I do get cross that we have to put up with inadequate transport because of politics. Like sport, it should be above politics.