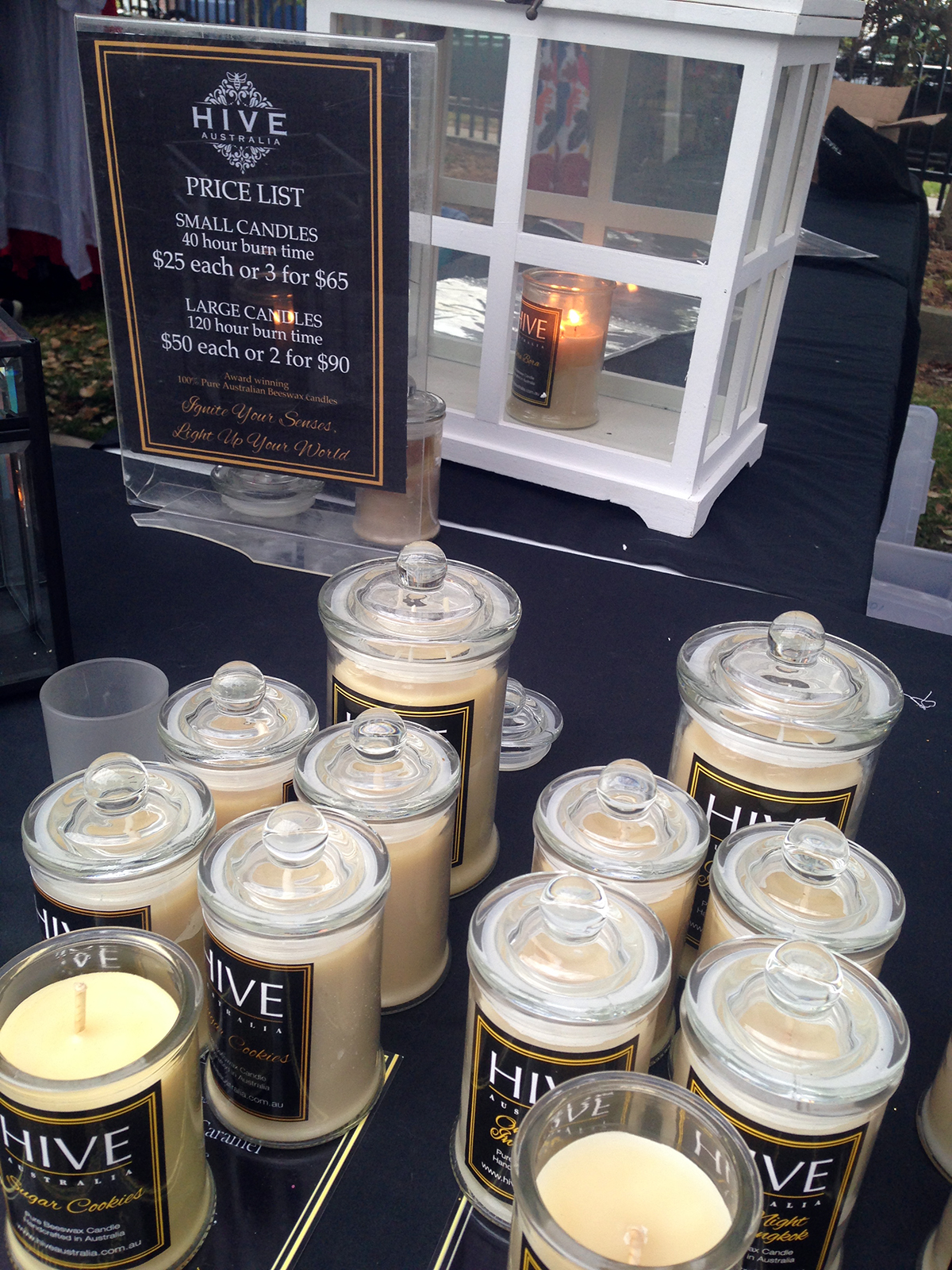 And now for something completely different

Posted by Sabrina | Lifestyle, News, Services | No Comments
So now I'm selling candles at markets at weekends. Why? I needed a change from spending all day sitting at a desk, behind a computer, dealing with coding and clients. In short, I needed an income stream which provides less stress. I am not taking on any new clients at the moment, but will continue to provide maintenance to existing ones. My website and graphic design business is now a part-time enterprise. A little bit more about the candles. They are made by HIVE Australia, and are 100% Australian beeswax blended with pure essential oils, and they have Australian cotton wicks. They are as natural as the HIVE team can make them, with no nasty toxins. As I've loved burning candles since I was a teen, I'm delighted to be spending my Saturdays or Sundays introducing this incredible brand to others, and enjoying the scented bliss of my market stall. You'll find me most Saturdays at the fantastic Orange Grove Organic Market in Lilyfield, Sydney. Keep an eye on my candles Facebook page to find out where I'll be each weekend.
0

Why I can’t stand people saying ‘I know, right?’

Posted by Sabrina | Writing and Editing | No Comments
It’s the verbal equivalent of The Teenage Eyeroll, a nasty little phrase which makes me grit my teeth every time I hear it: ‘I know, right?’ There’s a vast difference between ‘I know’, and ‘I know, right?’. ‘I know’ tells me that the person I’m chatting to understands what I’m saying or agrees with me. That ‘right?’ tagged on the end instead conveys this to me: I’m superior to you, I know more about the subject we’re talking about than you do, and I’m not interested in your point of view, so you can shut up right now. It’s rude. It’s condescending. Earlier this week I was watching Anh Do’s Brush With Fame on the ABC, and Anh’s guest was Kate Ceberano. I’ve always admired Kate; she’s talented, funny and gorgeous. However, I was shocked to hear her say, “I know, right?” when she and Anh were discussing their respective appearances on Dancing With The Stars and the hectic and arduous rehearsals they both undertook. Anh didn’t even blink. I would have been putting my palette knife down and ending the conversation right there. Sorry, Kate, I’ve lost a wee bit of respect for you. That ‘I know, right?’ made you sound like you didn’t want to hear Anh’s anecdote, that you weren’t interested in it. Rude? You betcha. Should we ever meet, dear reader, and in the course of our conversation you say, ‘I know, right?’ to me, please don’t be offended if I slap you. I just may not be able to resist it.
0

Getting spam from your own email address to yourself? Learn how to filter it out on CPanel

Posted by Sabrina | Services | No Comments
Recently I've been getting spam sent from my own email address to my own email address, with the subject line Contact Form Submission from My  Site, or Contact Form Submission from (insert Michael Kors or any other brand name here). These were robot generated, dropping into my inbox at a rate of one every couple of minutes. Annoying? Immensely. My first instinct was to check the back end of my website using FTP to check that it hadn't been hacked. All was clear. I use a Mac, and did check that my machine hadn't been vulnerable to any little nasties who'd slipped in under the radar. I host my own site and my client sites on platforms which use the excellent CPanel as a means for managing website software, spam fighting, email addresses and much more. END_OF_DOCUMENT_TOKEN_TO_BE_REPLACED
0 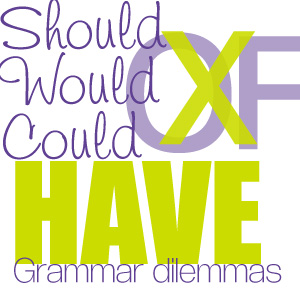 Should of, would of, could of. That’s just wrong. Grammar dilemmas.

Posted by Sabrina | Services, Writing and Editing | 2 Comments
I've noticed an increasing trend lately for people to write 'should of', 'would of' and 'could of' instead of 'should have', 'would have' and 'could have'. For example, 'I could of left earlier'. END_OF_DOCUMENT_TOKEN_TO_BE_REPLACED
0 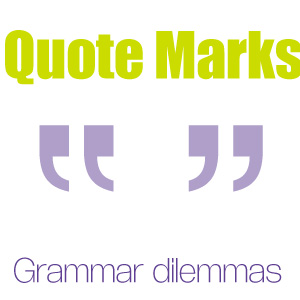 I was in year 4 at school when the concept of quotation marks was introduced to our class. Because I was a smartypants I had been writing stories for years using quote marks to contain my characters' speech, and the initial lesson on quotation marks was a validation of what I'd already been doing. I had taught myself by reading novels and noticing how quote marks went outside commas and periods. It all seemed pretty logical. And it is. So here's a quick lowdown on how to use quote marks. END_OF_DOCUMENT_TOKEN_TO_BE_REPLACED
0 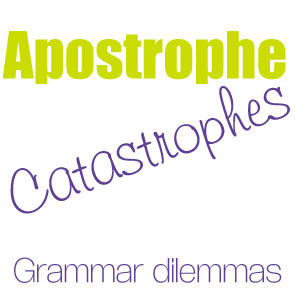 OK, hands up if you've heard of The Greengrocer's Apostrophe. This is an apostrophe incorrectly used with an 'S' after it to form a plural of a word.  You'll see it not only in the greengrocer's shop but widely in the retail sector, online and in print advertising.  Here are some samples: Apostrophe Man strikes again! An apostrophe does not a plural make in these cases. END_OF_DOCUMENT_TOKEN_TO_BE_REPLACED
0

Posted by Sabrina | Services, Writing and Editing | No Comments 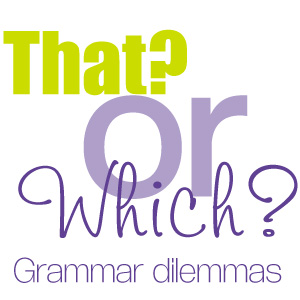 'That' introduces a 'restrictive relative clause'. Before your eyes start glazing over, this means that without this clause the sentence doesn't make sense. Think about it. "He picked the toy." Which toy? END_OF_DOCUMENT_TOKEN_TO_BE_REPLACED
0

Should you use a newsletter plugin or MailChimp?

Posted by Sabrina | Services, Websites | No Comments
Next time you get newsletters from fellow small business owners, scroll down to the bottom and check what software was used to develop or send them. Increasingly, you'll find they are being developed and sent using MailChimp. Until the last few years sending an email marketing campaign was costly for micro business owners. It was a tool used mainly by larger SMEs and big business. You'd pay a setup fee, a monthly fee, a fee per email...  Along came MailChimp, which offers a free service. If you have fewer than 2,000 subscribers, right now you can send up to 12,000 emails a month. With MailChimp you can select from a range of templates which can be customised fairly easily to match your corporate look. The system will even visit your website and grab your colour scheme. You can customise the code further to create a truly unique template, too. For the beginner, a few clicks will provide you with a smart-looking template which complements your website and branding. END_OF_DOCUMENT_TOKEN_TO_BE_REPLACED
0 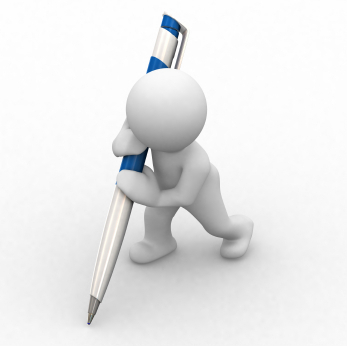 When imitation goes beyond flattery

Posted by Sabrina | Services, Writing and Editing | No Comments
Imitation is said to be the sincerest form of flattery, according to the old adage. But when does imitation blur the line and become plagiarism? It's very tempting to copy and paste from the internet; after all the information is there and who is going to notice? People copy and paste all the time, right? Here's a quick reference to keeping out of trouble online. There's a right and wrong way to use other people's work you come across on the internet. Let's have a look at the definition of plagiarism according to plagiarism.org, a website aimed at the education industry but relevant to all of us: END_OF_DOCUMENT_TOKEN_TO_BE_REPLACED
0 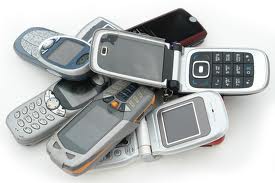 Remember the days before smartphones? When normal mobile phones could only send short text messages? Was it the short messages or the sheer frustration of having to tap a key several times to use the letter you wanted which led to the abbreviation abomination known as txt-speak?  I suspect it was a bit of both. Even in those early days, I resisted using abbreviations such as 'u' for 'you'. Whenever possible, I spell words out. I may, on occasions where I'm in a tearing hurry, send a text along the lines of  "Ok, c u!" but oh dear, it's just not me. My pet hate in txt-speak is using 'ur' for 'your'. Ur was a city in ancient Mesopotamia. That's the first thing I think of when I see 'ur' in a text message or email. In high school we had a passionate Ancient History teacher whose name escapes me, but I can see her now, small and dark, vigorously gesturing as she spoke about Ur and the Tigris and Euphrates rivers. She could see them in front of her, smell the smells, feel the desert heat, and she tried her best to bring it all to life for a classroom full of vaguely disinterested fourteen year old girls. So. I was fourteen and ur was Ur. Pronounced Err. If I wanted to abbreviate the word 'your', I used 'yr'. 'Yr' was used extensively by Jack Kerouac and the beat generation in the late 50s, and the use of 'yr' for 'your' goes back to the late 1700s. Confusingly, 'yr' is also a modern abbreviation for 'year', but unless you are extremely thick, you'll realise which context of 'yr' people are using when they write to you. I confess to using abbreviations such as LOL, BRB etc on Facebook and social media. Heck, I even speak LOLspeak, that feline language created by the Cheezeburger people. The English language is forever changing (unlike French, which is strictly controlled by l'Academie Francaise), and the way we speak and write reflects that. I'm happy to embrace change, but to a point: I have never used 'ur' for 'your', and I never will. I just find it offensive to my psyche. I'm a dinosaur. I suspect in fifty years time spelling and even grammar won't matter for the majority of people; we will be a society dependent on computers who will happily spell and correct for us. If I'm still around, you can bet I will still be resisting using 'ur'.
1 2 3 … 8 Next »