"Where did you get the name Arion Productions?"

I named my company after a horse. As you do. 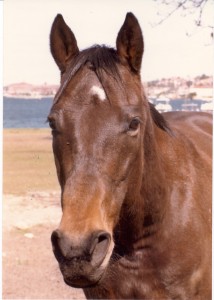 When I was a girl I was mad on horses and used to spend weekends at a riding school, thumping around the dressage arena on a pony with a mouth of iron, or cantering along on a trail ride imagining I was winning the Melbourne Cup. I didn't grow out of it - well, I grew out of imagining I was winning the Melbourne Cup but I did enjoy learning dressage -  and when I got into the workforce I was able to afford a horse of my own. I had a lovely horse who sadly developed a form of arthritis which put paid to his showing and jumping career, so I looked around for another that I hoped would go far in the show ring. I found an ex-racehorse, who had raced under the name of Extra Strong. His breeding was impeccable, with Star Kingdom and other luminaries in his pedigree. He was beautiful, compact and faultless to look at. And he couldn't run fast enough to catch a cold. He was retired after two starts. His best effort was 14 lengths behind the second last horse in a maiden handicap at Kempsey.
If you don't know anything about horse racing, let me tell you: this poor horse was destined either for the dog food tins or someone who'd take him on in another career. I bought him from a show rider who had too many horses at the time and didn't have the time to bring him on. His stable name had been Vin, and before that, Wally in his racing days. I wasn't keen on either of those so I got out my book of Greek mythology and discovered a lovely legend. Poseidon was the God of the Sea and he drew the 'white horses' from the sea, formed them into a real horse and gave the first horse to man. He called the first horse Arion. Perfect, I thought, and Arion it was. Arion never did make it big in the show ring and he's now galloping in another mystical place, the Elysian fields. We had a lot of fun on the way though. He had a sense of humour, was kind and loving, and shone like brown satin in the sun. Before I had my own company I would make greeting cards for friends and jokingly badge the back with 'Arion Productions' and a cartoon of my horse. When it came time for me to leave the corporate world and start up on my own, the company name was a no-brainer. Arion Productions became a real entity. I'm still considering using the cartoon horse, though! - Sabrina Ferguson

Get Jaaxy, the world’s most advanced keyword search tool – free!